About Us Our Team PortfolioCase StudiesBlogTestimonialsFrancophoneContact Us
Free Quote

The nature of the hotel industry is very competitive, particularly in large urban markets with seasonal variations. Developing an online marketing campaign to provide stable long-term traffic and raise conversion rates to maximize revenue was the challenge that Guaranteed SEO took on. Getting more first-page search results for appropriate keywords was just the start.

Best Western Downtown was finding that visits over the year were inconsistent and that maintaining traffic and keyword rankings was difficult, particularly in key tourist seasons. Best Western Downtown also had issues with traffic quality and as a result; conversion rates on their website were low, and bounce rates on key landing pages were higher than desired. All of this amounted to a significant loss of revenue and a fix was sought out to both grow and stabilize website-driven bookings. 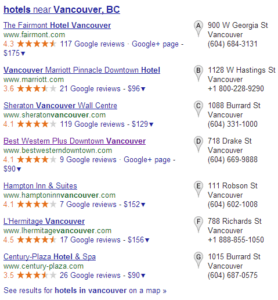 Guaranteed SEO sought to boost the traffic of Best Western Downtown’s website, with link building and the addition of a broad range of new keywords capable of bringing more unique visitors and potential clients. Despite a limited budget, Guaranteed SEO worked on rebuilding the client’s website in a way that visitors were motivated to spend more time on the site, with a clearer Call to Action and a higher probability of goal conversions.

As a result, the client’s site showed up for a broader range of search terms on the 1st page of Google’s search results and experienced a higher conversion rate of visitors to paying customers.

Most of the changes were done after January 2013. Work done included link building, where Guaranteed SEO built new “Google Compliant” links for a large range of new keywords related to “Hotels in Vancouver” and other phrases that supported Best Western Downtown’s marketing and positioning goals. Furthermore, the Google Maps’ indication for Best Western Downtown which had been pointed to an incorrect URL was fixed so it was linking directly to the site in Vancouver, and the Google Plus profile was also improved with  Guaranteed SEO’s know-how.

In March 2013, the new website was launched. Guaranteed SEO rebuilt everything, created a new design, and new pages with easier navigation to enhance client understanding and ability to book. The website proved significantly more effective for visitors and soon after the launch was able to reach goals set for conversion as agreed to by the client and  Guaranteed SEO.

As part of this work, Guaranteed SEO also created more user-friendly and search engine supportive content. Content creation was one of the important changes in the website.

The improvements made by Guaranteed SEO resolved the issues of one year ago. After the new website was released in March 2013, it received much more visitors, especially from organic searches, showing that the new link building and keywords worked well and Best Western Downtown is now easily found in the search engines. Also, direct visits improved, showing that their brand is stronger than before on the web.

A significant improvement in traffic 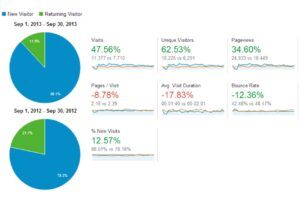 There is a big increase in visits, and as we can see Unique visitors, or, potential new clients. The bounce rate is now better than before, showing that the new website is keeping visitors more engaged, looking for their interests in the website, turning into possible conversions. We had less Average Visit Duration and Pages per Visit, but it’s not a big difference and can be explained because on the new website it is easier to find the proper information such as phone numbers, reservation widgets, and addresses; thus resulting in less wasted time and higher customer satisfaction.

Here we have the whole visit progress, which shows right after March (the new website release) had a big increase of visitors during the summer season, with a shortfall in August, which is the month between summer’s end and hockey season.

The bounce rate progress can be viewed here, where before March was really high, and then had a great fall in March 2013, stabilizing a good bounce rate for the website.